I quite like the new symbol library and the fact that it supports dwg files as well.  It’s something I need to test and to be honest we still use idw as the default drawing format just because the file size is smaller, because Inventor will create the data as a block in dwg and mostly because of habit and resistance to change. But that’s not what I want to discuss today. 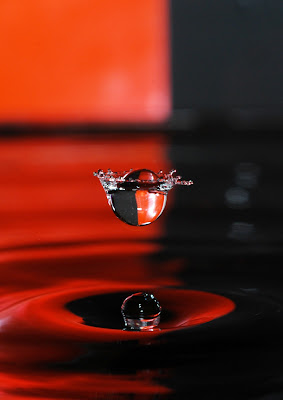 I want to show you a magic trick on how to have notes and symbols linked and moving with a view even though they appear to be floating around it.

In most of the cases the symbols will have a leader and an attachment pointing and sometimes I need to drop them on screen as part of the view but without being attached to a specific element. A note like the sheet metal details we have been discussing here, which I like to include before exporting my drawing to dxf and sending it over for laser cut. That note needs to be on the drawing but I like to attach it to the view so that if I move or copy the view it moves the symbol as well.

The way to create floating notes glued to the view is to use symbol notes and the trick is to take off leader visibility. This way the symbol is attached to the view and it just looks like it’s floating around.


This is also good for general notes if you don’t have a separate demarcated area on your drawing or you need it next to the view. When the drawing grows with added dimensions, notes and callouts and you need to move it, the general notes symbol will move and maintain its position in regards to the view.
Start the symbol with the shortcut (mine is set to "sy") or from the Annotate tab, Symbols panel or by right click it on the Drawing Resources, Sketched Symbols folder and choosing Insert. 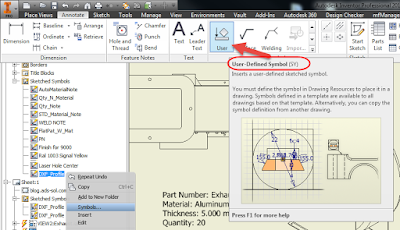 You can double click the symbol and choose an attachment point but there's a catch. If you do it this way the leader visibility cannot be turned off until you drag the symbol from the default place location. Then the the extra options Leader and Visibility are available.

In conclusion, if you move or copy views you might want to do you notes as symbols (still a leader note) but you can control the visibility of the leader and the attachment point and if you move the view around the note goes with it. And furthermore you can have it in the template.idw symbols ready to drop in.

Photo credit: Crowned via photopin (license)
Posted by ADS at 07:40