Got a really nice one today.
The title might confuse you and lead you to believe that I will talk about iAssemblies. That’s a nice topic on its own but I will cover a different idea.
You will use this in the prototyping phase to quickly test alternate solutions for routing your pipes. And when you do, think of me and all the sleepless nights I’ve wasted testing and pushing the limits of Inventor and T&P trying to help you out.

For months I have been testing and preparing a blog on mirror, clone, derive, and copy and ... there’s not much to be told. Autodesk has locked it all in and it’s for the most of it unavailable so no blog for me. I am still testing though and present the mirror command briefly in here now.

One of the posts on the idea station on overhauling T&P (idea 56 actually) is about getting route lines to construction and vice-versa and in the process have Inventor to automatically add and remove pipes depending on the line type.
That is a nice idea and you should vote for it, but meanwhile........  I have found a way around it!
Don’t go tell Autodesk because they might fix it, taking this option out and leave us to dry out again.

I have just finished a quote for a client and it’s been accepted and signed off when we got the CALL. It needs to be on the other side of the room and need it presto !
If you try to use mirror on T&P or any of its runs you will get this message: 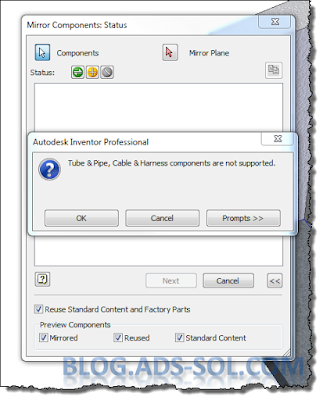 Maybe one of you has a solution but I have tested as much as I could and no solution emerged. You can mirror it alright but you can’t modify it later on, by means of making it a T&P run and routes. If you disable T&P add-in you can use the mirror and what I’ve done was to reuse all except routes and pipe segments. This works so you can document it on a drawing but there is no “Make Adaptive” menu in T&P anymore so it can’t be edited as we would a copied route.
You can however mirror the sketch segments inside the route. This is not available on the Route tab but on the 3D Sketch tab. This works ok and it’s better than you think. The new segments will have mirror constrains and adapt to changes to the original ones. 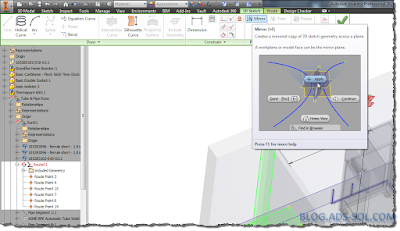 So I had a partial solution to quickly mirror my routes but what about the fittings? Unfortunately I had to place the fittings all again but took seconds because I would pick them from the original route.
The problem is that if you delete the original route segments you lose all constraints and dimensions for the mirrored ones as well.

So I decided to see if I can change the original segments to construction line and make Inventor remove all the associated pipes and fittings. Using the Construction button from the Format panel of 3D Sketch tab didn’t work at all but that’s where we become creative and started“bending the rules”.
Let’s call the assembly with the T&P files “main assembly” just to clear things out. Create a new assembly and place the main assembly.
TIP: fastest way is to use copy paste. You right click the main assembly (top node) and choose copy and in the new assembly use CTRL+V or paste from right-click contextual menu.

Find the route in the browser and edit it. Inventor will complain and tell you that: “To perform Tube and Pipe operations, the main Tube and Pipe assembly should be open in its own document”. Select the segments you need to change and use the Construction button from the format panel of the 3D Sketch tab. As soon as you exit the route Inventor will remove the pipe and fittings that were converted to construction and will add elements where construction has been converted to normal.

This opens a whole new way of doing my prototypes and to test and verify alternate routing solutions in the conceptual phase. It’s there where I tend to waste a lot of time trying to spaghetti fit my pipes and the only option till now was to delete segments and route them differently while now I can keep all options and better test which will work better.
On a side node you can now change all the edges added to the route with Include Geometry tool and that were construction lines. So you can use edges from other equipment without routing and constraining on top of them but rather use the included edge itself.
At this point you can close the new test assembly without saving it. It has never been saved on disk just helped us change the route segments.
And the video