Last week I’ve shown you how to do mixed styles routes and how to align the 3D ortho tool and now it’s time to discuss construction lines for Tube and Pipe module of Autodesk Inventor. At this point I wonder how many of you are using them and even know of their existence?
The place command is hidden, you cannot change them to normal and vice-versa, they are always visible in the model and drawing and yet there are times when you might need them.
Can’t say I blame you if you’re not using them, you can do away with just dimensions and constraints but I found them useful at times and that’s why I decided to share this post. 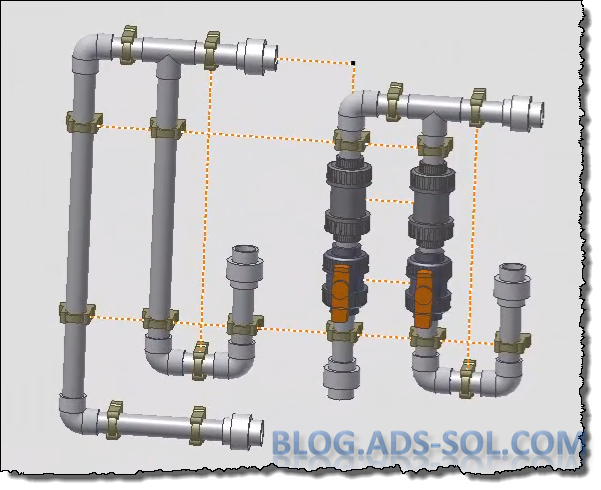 They could be annoying being visible all the time but you can hide the route if need to and on the positive side you can edit the route really quick by double clicking on the visible lines.

The command is not on the ribbon and it can only be invoked by right clicking on a node inside the route. This is only available for route nodes, not on construction line nodes, and it’s only available in the contextual menu while you are in the main Tube and Pipe environment. If you open the run on itself and try to edit the route you won’t have the option to do construction lines. 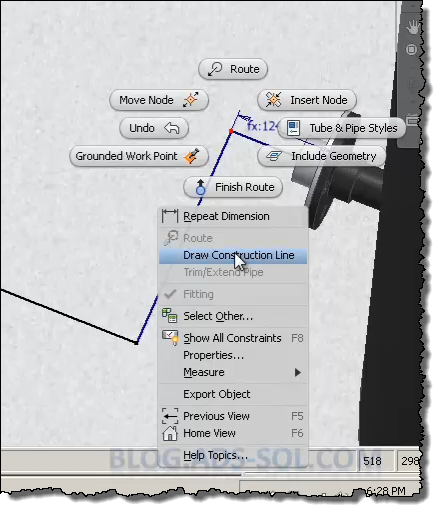 On each node you can start multiple construction lines but keep in mind that you need to constrain them even though you used the triad axis when drawing them. Regular segments get constrained at least collinear or perpendicular with previous segments, while construction lines are floating in model space with just one end connected to the starting node.

In the image bellow I am constraining the tee center in between the pumps by first creating a construction line from one pump center to the second. Then I am doing a different line starting from the tee node perpendicular to the first one and coincident with the middle of first one.

A more eloquent example might be when you need to dimension you route at an angle for which you can’t use included geometry. At this point you can’t add dimension between segments and planes, just to nodes and to get it right you might need to play with formulas and trigonometry. 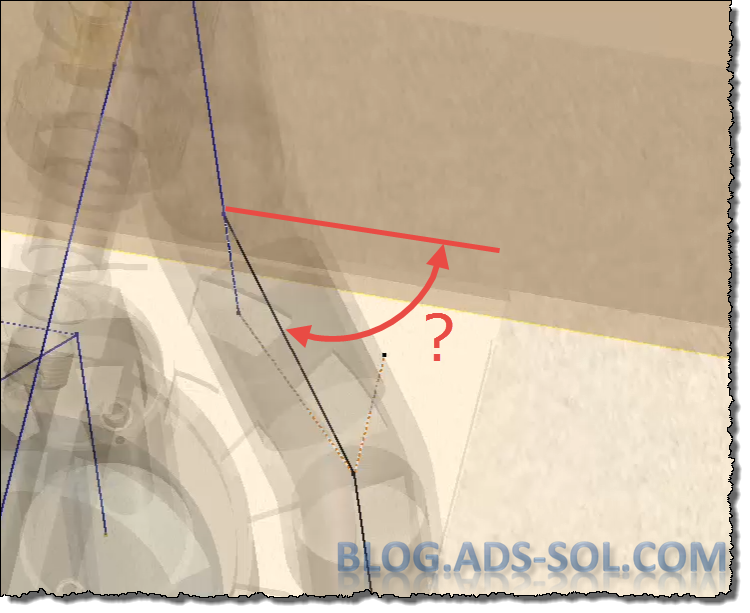 Using construction lines you can constrain the projection of the angled segment into a plane that suits you where dimensions can be applied.
As you can see in the image bellow I have created a couple of construction lines to serve as projection of the angled segment. There is a third one that is constrained against the run origin (included geometry) and is used as fixed reference to dimension against.

In the last example that I have used construction lines to form a grid to which I have constrained my nodes. This will work similar to reused dimensions but it’s less messy, and the route is a little neater.

Start a construction line and constrain it to your references, I would recommend that you use include geometry on run origin planes. Keep your external references to a minimum, try to avoid faces that could change leaving you with broken links. Keep these as local as you can just like my run planes.
Constrain this construction line coincident to one of the points, it doesn’t need to be the farthest away, and you could even just use a small dimension to minimize its visual impact outside of the route. Coincide the rest of the points that lay on this line even if it doesn’t passes through them. The points will be in line with the construction segment.
At this point you just need to dimension one of the nodes and the rest of them in-line will follow.

The good part is that Inventor doesn’t generate a pipe segment where you’ve used construction lines but you can’t switch them back and forward as you might expect. Once you’ve done it as construction you need to remove it and draw it again as regular if you need a pipe segment there.
The drawing environment is having the same visibility problem with this type of lines. As soon as you use include route centers it will bring over the construction lines as well. You then need to turn visibility off by selecting them individually or with window select.

And that’s how you can use construction lines to help you speed up your design.

As usual, there’s a video.