Again with my usage statistics, I must be obsessed with it. I keep tracking applications, keyboard and mostly mouse usage and I was shocked by the current results. I just bought another mouse and I’ve gone for the Logitech G602 which comes as a gaming mouse and it has way too many buttons (yet) but I really wanted a tried and tested endurance mouse. The mouse is great and it seems it should last 20 million clicks!
Is that a lot, l I am asking? I am doing between 1 and 3 million clicks every 6 months on my Roccat Kone XTD. I don’t have the figures at hand because IT has re-installed my windows and the statistics were lost but I have installed the app again that comes with the mouse and here are the results for 2 days of work, around 8-10 hours all together, not including lunches, brakes, phones, meetings, etc.. 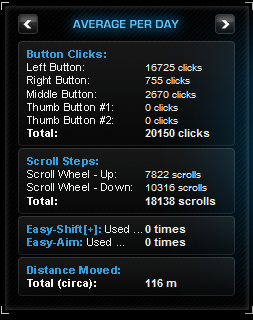 In average per day results are:
Let Click: ~17000
Right Click: ~750 ( I use space as enter for AutoCAD, right click brings menu up)
Roll Click: ~2700
TOTAL Clicks: ~20000
TOTAL Scrolls: ~18000
Distance travelled: ~116m
I have the mouse on max DPI max speed; I don’t like moving the mouse too much to get over 2 screens.
Don’t know what you track but I think THAT’S TOO MUCH! Now I have an excuse for being tired and cranky by the end of the day.
Searched online for your and found a nice little program that does more than tracking clicks. It’s free and it tracks application history, keyboard, mouse and general statistics. The program is called Application Usage Statistics and you can get it from here: http://usagestats.codeplex.com/
What I like about it is that it reports clicks and double-clicks and where they occurred on the screen, as well as mouse tracks and drags (where you've been on the screen).


Here is how the program looks like, so give this free goodie a try: